Have you ever been in a situation and you wondered, “did I miss something?”  Those were my initial thoughts during what felt like a 1/2 mile hike to the Ella Jungle Resort.

Let’s start from the beginning.  I booked my travel through a Sri Lankan travel agency. They sent me various hotel options and I only looked at two things; the rooms and spa options! So when the taxi dropped me off at the top of a hill and said, “this is as far as I can take you, you will have to go in the jeep to the midpoint and then hike to the resort,” I was a little confused. I knew the name of the resort had “jungle” in the title, but I obviously missed some important details.  Well……there is a tiny sky-lift that was supposed to take guests from the midpoint to the bottom of the hill, but the lift was broken. Luckily, my guide/jungle bellhop carried my suitcase and I had on hiking books.  Dawn was upon us as we approached the swinging bridge. I AM an adventurous person, enjoy hiking and in most cases don’t have a fear of heights, BUT I was not mentally prepared for this. Plus…..I had all kinds of crap in my left hand that I just grabbed from my taxi in a rush.  In deep concentration I tapped into my mindfulness practice, not to freak out, and crossed the bridge. 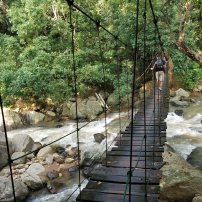 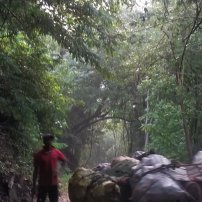 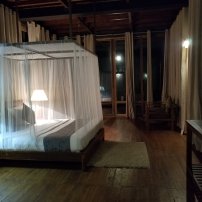 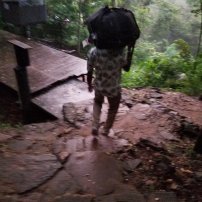 There wasn’t a reception area just a man, I called him the jungle concierge, who directed me and the jungle bellhop to my room. Yet another tiny hike.  It was now dark. Finally…… I made it to my room and it was as if I walked into a dream!  The room was surrounded by windows, hardwood everywhere and high ceilings. I thought, “I could live here.” The bathroom was ok, no tub and a shower that was one with the bathroom floor. But the room was like no other. The room even had a back patio that overlooked the river. After the jungle bellhop left I plopped on the bed. The first thing that caught my attention was the river speaking to me in the background. The river quickly put me in a state of relaxation and I took the best nap of my life. 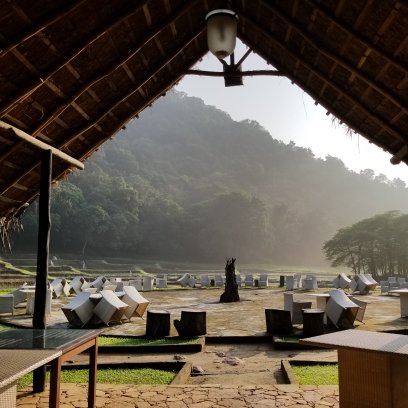 Guests had to report to the lounge for dinner at 7:30, I was promptly there at 7:25. I set my alarm clock!  Y’all know I love to eat. It was during dinner when I met my jungle buddies: Christina, Garry and Michael.  There were only six guests at the resort that night.  When we arrived for dinner the jungle concierge had already set up our tables based on our hotel accommodations. Since I was traveling solo there was one plate at my table.  Hmmmm. After bonding with my jungle buddies, two of which were still in shock from their hike to the jungle, we asked the waiter if the four of us could dine together.  To say we had some good laughs that night is an understatement.  Meeting the three of them was one of the highlights of the trip.  Y’all know I enjoy being around folk with a good sense of humor.  What a treat!  The four of us would like to think of ourselves as great adventurers, but it took a little while for at least three of us to process what just happened and where we were. Christina had been there two days already, so she was fine and helped reassure us a bit.

Unfortunately, I was only at the resort for one night; I had to get up early for the drive to my Ayurveda resort.  That night, with the river whispering in my ear I had the best sleep in over a year! No internet, no technology, just peace and quiet. Oh, with the exception of the pitter-patter of little feet from Michael and Garry upstairs!  The next morning I got up at 5am packed my bag and peaked out the back window. Yikes, it was way too dark.  Afraid of jungle creatures I closed the curtains and patiently waited until the sun brought light to my deck and then I rushed outside to play. On the back patio I excitingly planted my yoga mat, said my prayers, practices my pranayamas and asanas and then headed to the river to play in the water, camera in hand.  I didn’t want to leave………, I was in love. 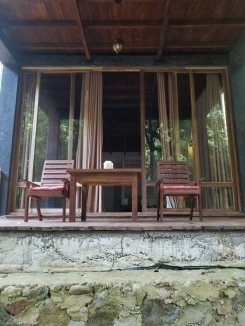 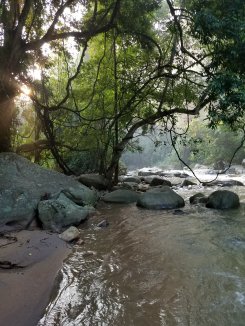 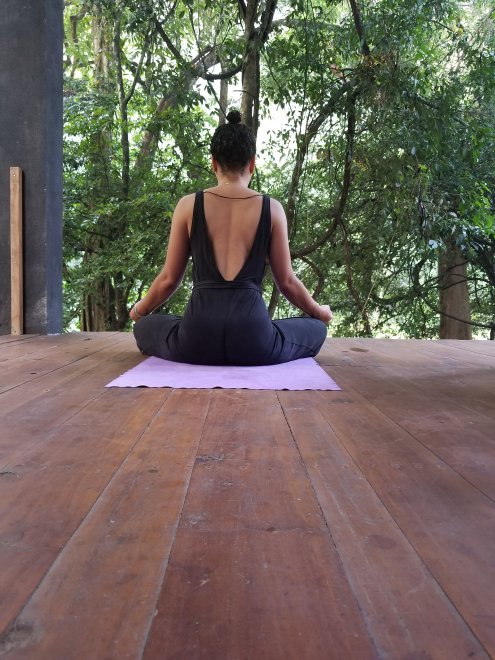 I met my jungle buddies for breakfast for more laughs and storytelling.  The jungle waiter was gracious enough to set the table for four.  The jungle strangers/buddies took photos and then Mike and Garry crossed the bridge, hiked the jungle and then caught a ride with me and Christina to the top of the hill.  We exchanged information and hugs and said our farewells.  Throughout our trip we all stayed in touch and checked on one another.  To be honest, I hope to one day make it back to the Ella Jungle Resort, next time I will stay for three nights.  One thing is for sure if I do go back, I know it will not be the same without my jungle buddies! 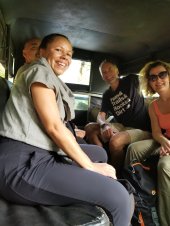 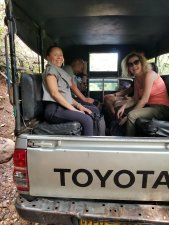 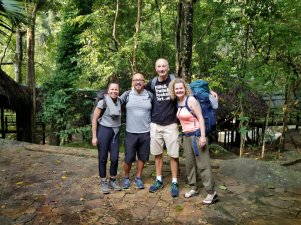 Published by I'm All Over the Place

Kenya’s journey to self-love lead her to KonMari, Ayurveda, Feng Shui, mindfulness, compassionate badassery and the profession of personal organizing. View all posts by I'm All Over the Place

6 thoughts on “The Jungle”

Join 87 other subscribers
Follow I'M ALL OVER THE PLACE on WordPress.com